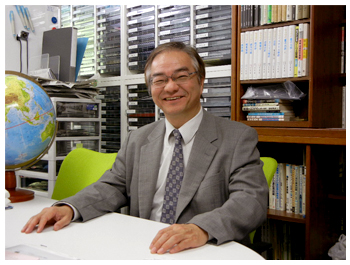 Nanovision science involves the full utilization of nanotechnology to create new academic and technological fields that radically innovate conventional imaging technologies. To achieve this, fusion with various imaging-related elemental technologies and innovations and their underlying science as well as collaboration with users of the latest imaging technologies is essential. Fortunately, the Institute possesses numerous excellent materials, devices, systems researchers and facilities for electronics related to optics and imaging. In 2008, we initiated a joint use and joint research project to invite researchers to conduct research and actively engage in joint use of our facilities with the Institute’s researchers. We have received many applications, and the project has produced a rich harvest of results. In recognition of those results, in April 2013 the Institute was certified as an Imaging Device Joint Usage Research Center by the Ministry of Education, Culture, Sports, Science and Technology (MEXT). Also in 2013, a joint proposal from Hamamatsu Photonics K.K., Shizuoka University, Hamamatsu University School of Medicine, and The Graduate School for the Creation of New Photonics Industries was selected by MEXT for the Project for the Development of International Science Innovation Centers through Academic-Industrial Collaboration Utilizing Regional Resources in which the Institute will actively be involved. In this way, the Institute is steadily building a position as a center for imaging science and technology.

International exchange programs are very important for an intellectual center like the Institute. We must engage in world-wide dissemination of the research results obtained at the Institute in a prompt manner, as well as joint research with numerous research institutions around the world. The Institute has a position for a visiting foreign professor and over the years has hosted visiting professors from many countries who have produced tremendous results. In addition, each year we utilize Special Funds for Education and Research and other funds to invite guest researchers from many countries to engage in joint research. We intend to continue to develop international exchanges through these programs and further expand and upgrade the programs.

The Institute is also expected to contribute to society. Hamamatsu is famous for being the birthplace of venture business companies, and the Institute has a tradition of contributing to these companies. Currently, four university-launched ventures in which Institute staff members are involved are working to commercialize technologies that originated at the university as well as create employment. In this way, we wish to cooperate with local industry through research and development. We intend to develop a powerful industry-government-academia collaborative structure and build a knowledge center related to imaging science and technology. Another important social contribution in addition to the abovementioned direct cooperation is the publication and disclosure of intellectual products (research results) of the university to society. Each year the Institute holds many international symposiums, such as the Takayanagi Kenjiro Memorial Symposium attended by many famous researchers and international symposiums held by staff members using funds including the Special Funds for Education and Research. We also seek to fulfill our responsibility to society with the publication of research results through patents, newspaper announcements, and other means.